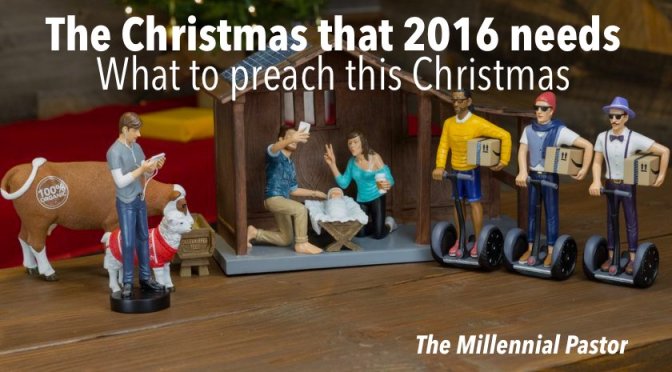 For so many people around the world 2016 has not been a good year.

Perhaps, like me you are about to stand in the pulpit on the biggest day of your church year and you need to preach to people who you may not see for another year and to those you see nearly everyday.

Or maybe you are about to go and hear a preacher tell the good news that the angels told the shepherds about. And what you need most is for that good news of great joy to be not just a 2000-year-old story but a 2016 story.

For many wanting to preach and to hear the good news, we are going to be pushing back against a world that wants to bury its head in the Christmas sand. Deep down we know that the good news simply won’t come from nostalgia and sentimentalism.

We know that the falling snow at the end of Christmas movies won’t save us from sin and death.

We know that a bumbling hero putting on a Santa suit to “save Christmas” is no salvation at all.

We know that perfectly roasted turkey, beautifully wrapped presents, and old time Christmas favourites wafting from the radio are not the things that truly encompass the spirit of the season.

And we also know that getting all the food on the table on time, dealing with racist uncles and navigating sleeping arrangements at the in-laws are mostly harmless problems compared to the real stuff going down all over the world.

For many of us, 2016 has been the result of a long build up. Or should I say a long descent back into the same darkness that engulfed the world of 1st Century Israel, the world of Mary and Joseph. No matter what anyone claims, the stability that much of our North American world saw in the 1950s and decades following is not coming back. (Plus women, people of colour, and religious minorities will definitely not agree that this was a golden period in the first place).

So what are we left to preach for Christmas 2016? What is the good news for us?

Well, strangely the good news announced to those shepherds might be more fitting than ever in 2016.

In fact, if there is good news to be found in midst of all the darkness we have lived through this year… it is the same good news found in the darkness of the year of Messiah’s birth.

If God can be subjected to forced migration and registration simply because of ethnicity, religion or skin colour…

If God can have no place to live or sleep, no healthcare to be born with, no community to support new parents other than shepherds (the drug dealers and street gangs of the day)…

If God can be forced to flee in fear from the murderous death squads of a fearful despot, and only have pagan lands to go to…

Then certainly the Messiah can come to save us in all of our darkness.

No political leader, no terrorist act, no pandemic virus, no celebrity death, no climate disaster, no  refugees crisis, no cyber attack, no amount of fear or hatred or bigotry is too dark or too much for Messiah to come and save us from.

2016 has only managed to show us just how badly we need to be saved… and Christmas reminds us just what form that salvation arrives in.

So to my colleagues and kindred preachers, find the good news in the One whom we know has already come into our darkest world.

In 2016, preach that Messiah has come into our darkness, and that Christmas finally brings us some light.

And if you are really stuck, here are two sets of Christmas Sermons:

You can also find me at Christian Week

An iPhone Pastor for a Typewriter Church